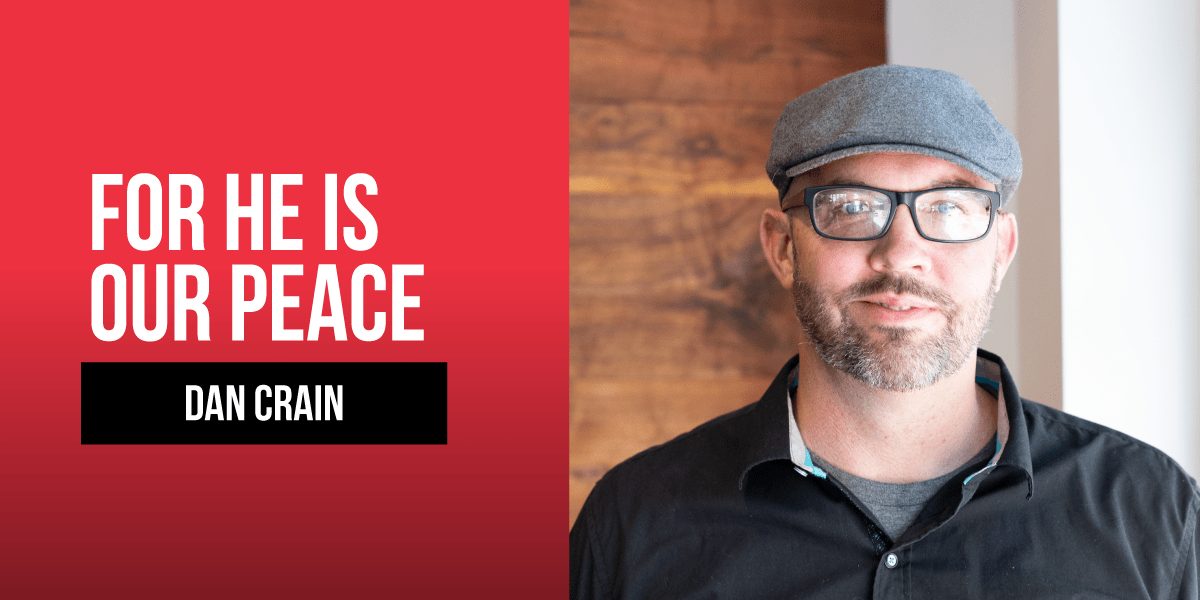 For He is Our Peace

“And in Antioch the disciples were first called Christians.” Acts 11:26. Pastor Matt Mcgue’s blog, A Reconciled Church did a great job describing what happened as a result of the gospel being preached in Antioch.

How did this happen? This wasn’t Jerusalem, the epicenter of the new Jesus movement. Antioch was not even close to the center of the birth of the church, being roughly 300 miles away. It was located in what is today modern day Syria.

But yet, in Antioch Luke decides to drop this nugget in his letter, “in Antioch the disciples were first called Christians.”. The word Christian had never been used before until this point. Can you imagine what it looked like to an unbelieving world to see what was happening in Antioch? Imagine witnessing eighteen different cultures and ethnicities in a packed city like Antioch, where the dense population was around 117 people per acre, coming together under the name of Jesus the Christ.

Antioch was extremely divided among the eighteen different ethnic groups living in the city. It was designed this way from Roman oppression. Then the good news of the gospel came to Antioch and a whole new group of people were born.

But why did this happen in Antioch? I believe the different ethnic and cultural groups that heard the message of the gospel about the forgiveness of sins were so caught up in the triune love of God that nothing else mattered to them.

Imagine the movement of the Holy Spirit in this church as the reconciling spirit of God caught the new Christians up in the triune love of God. Can we wrap our minds around the beautiful unity, interdependency, and mutual penetrating spirit that is at work among the Father, the Son, and the Holy Spirit? Meditate on this. Let our hearts and souls be drawn into this, because this is what the triune God is inviting all of us into as his body here on earth!

Their identity was so rooted in Christ that they forsook everything for his love and love for each other. The very indwelling life of Christ allowed the Jews and Gentiles to overcome their cultural superiority in the city of Antioch because they became so in love with the triune God that none of their cultural norms mattered anymore. David Stern comments, “He is our shalom. Not only does Yeshua make peace between Jews and Gentiles, but also he himself is that peace. He, living in believing Jews and Gentiles, is the one that has made us both one, for our oneness in the one Messiah living in both.

One of the core reasons the church is still divided in this country is because our identity is not fully rooted in the love of the triune God. It’s rooted in our political affiliation, the spirit of religion, and American culture. This should not be so.

As Pastor Tony Evans stated in Oneness Embraced; “One of the things that you and I have got to understand as brothers and sisters in Christ is that this divide in our culture and in our nation is because people have chosen to pay more attention to their granddaddy than to their heavenly Father. It is because people have held a stronger commitment to the history of their culture than to the person of Jesus Christ. There has been a more faithful allegiance to background than to the Bible.”

If the church is still divided in this country among color, class and culture, we have to really wrestle with the question of, why? Are we valuing culture, political affiliation, denominationalism, over the core identity that we are all the beloved of God?

In a recent prayer burn at a friend’s church, I sensed the Spirit say, “Reconciliation is not happening in the church in America because our identity is not fully rooted in Christ, it’s in our culture.”

Is Christ really our peace in the church in America? Or is it our love of country? Or our culture? Or our political affiliation? Or our denominationalism? Or our __________?

So what does this mean for the church here in our country where we are still clearly divided? Is Christ really our peace here in the church in America or our cultural norms? If there is no division among the triune God, then why is there division among his body here on this earth? The person and life of Christ is our very element of unity.

As Dr. Korie Little Edwards stated in an article in Christianity Today about the Multi-ethnic church; “God has not called the church to “diversity.” God has called the church to oneness. I have no better solution than the gospel of Jesus Christ for this, and there are a few biblical principles that I believe are essential for the journey toward oneness.”

Come, church. Let us go so caught up in the triune love of God that we forsake everything for the cause of Christ and for oneness. The Father, the Son, and the Holy Spirit are one, and we are called into this oneness.